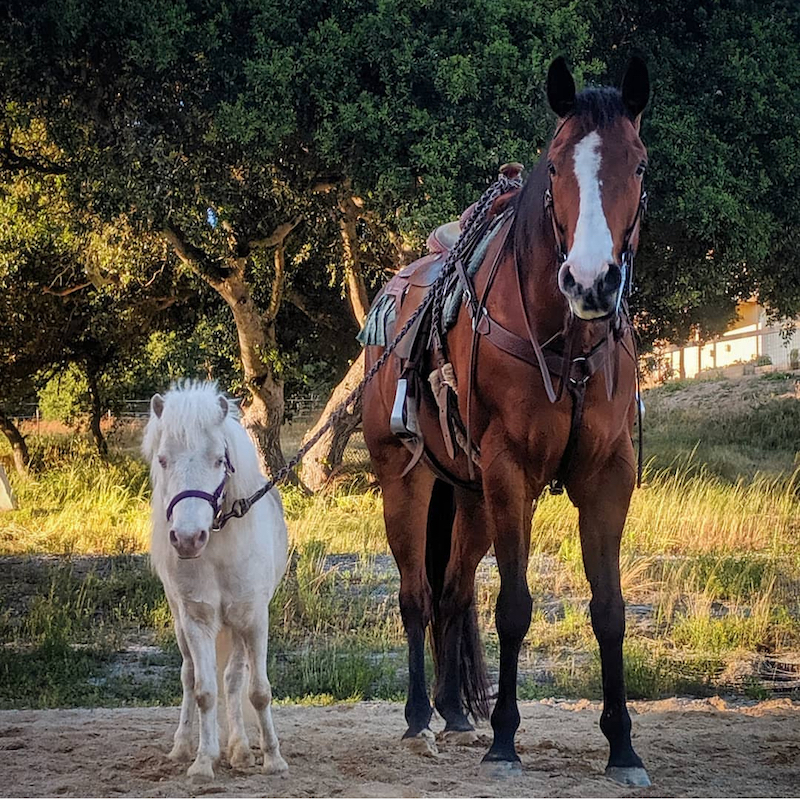 Minis may be small and adorable, but don't be fooled, because their health needs are anything but! One issue that is especially common amongst minis is obesity. Tune in as RW crew member, Erin, tells us all about her mini, Cupcake, and how she manages her weight.

My mini, Cupcake, came into my life 6 years ago. I met her when she was just a few hours old, and she officially became mine after she had been weaned at 7 months. While minis are undoubtedly adorable, they do require specialized management when it comes to their weight. Below, I’ve compiled some best practices I use to control Cupcake’s diet, as well as a brief overview of her exercise routine.

Cupcake at just a few hours old​
Dangers of obesity

My journey with Cupcake has taught me how important weight management is for minis. Obesity can have negative side effects in animals of any size, but because minis are so small, packing on a few extra pounds makes a huge difference. Obesity in minis is a huge concern, as this can can lead to a variety of health problems such as laminitis and metabolic disorders.

Despite their size, miniature horses’ health care needs are just as sizable as those of regular horses!

1) Understand the pecking order: Cupcake has always been the top of the pecking order, so she tends to get however much food she wants. If it were up to her, she would eat all day, every day.

Cupcake is the leader of this pack, and she knows it. ​
I learned this the hard way when I had in her a pasture with a few other horses; she gained a ton of weight, and fast! I now keep Cupcake in a private pasture with just one other horse so that I can more easily control what she’s eating.

2) Make a specialized feeder: I use a large feeder - actually an old 300-gallon cattle tank - to put my horse’s feed in. All of his hay as well as his grain bucket go in that feeder. I drilled holes in the bottom of it and attached a couple of 4x4’s to lift it up off of the ground so that it can drain when it rains. Cupcake is able to just reach into the bin to get bites of hay from around the edge, but she is not able to reach my horse’s grain – added sugar and fat that she does not need! 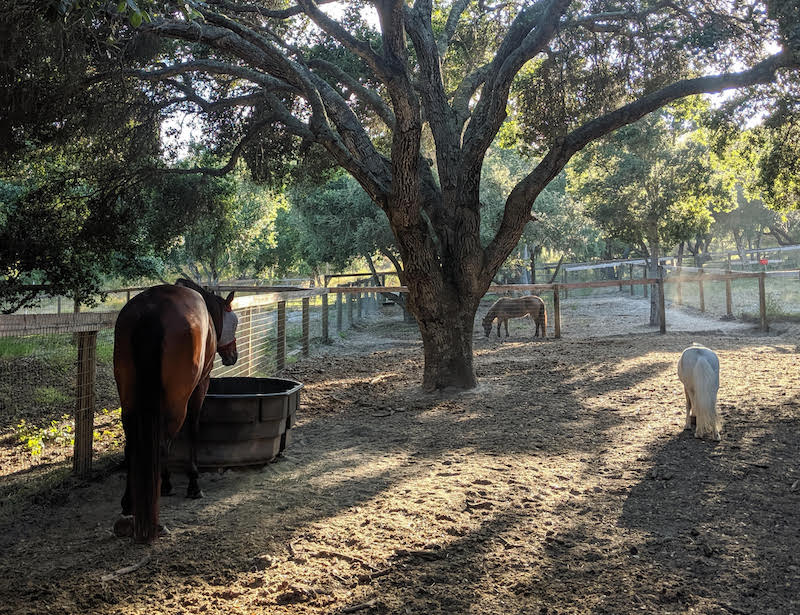 This 300-gallon stock tank, when lifted off the ground, is just tall enough that Cupcake can't reach her nose in very far​
3) Avoid high sugar, high calorie feeds: The only treats I feed Cupcake are fresh carrots, as many horse cookies have a lot of added sugar in them. I do give her a handful of soaked hay pellets in a small bucket so that she will leave my other horse alone while he eats his grain. She is in great health right now, so I don’t need to feed her any supplements.

A lot of feed companies produce low-calorie pelleted feeds, so be sure to work with your veterinarian to determine your mini’s nutritional needs!

Besides controlling Cupcake’s diet, exercise has been a huge part of making sure that she stays at a healthy weight. The most effective way for me to do this is by ponying her off of whichever horse I am riding. Teaching your horses how to pony is a process, so here are a few tips you can use along the way. 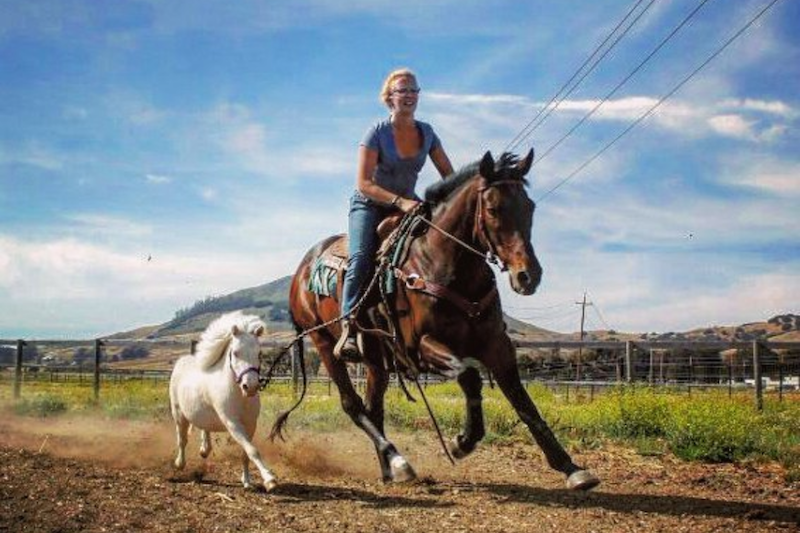 Cupcake and Cooper are ponying pros. ​
1) Start on the ground: Start by just leading your two horses together on the ground. Leading Cupcake with my riding horse was a great first step towards getting them both used to always moving together.

2) Then introduce ponying in hand: For small horses like Cupcake, it’s a little confusing why they’re supposed to follow you when you’re so far above them. Start with just holding the lead rope so that you’re able to give your horse some slack if they pull.

3) Slowing integrate tying to the horn: Once they get used to that, wrap the lead rope around the horn of your saddle but still hold the end. That way, there’s pressure on the saddle but you can still give if your horse startles. 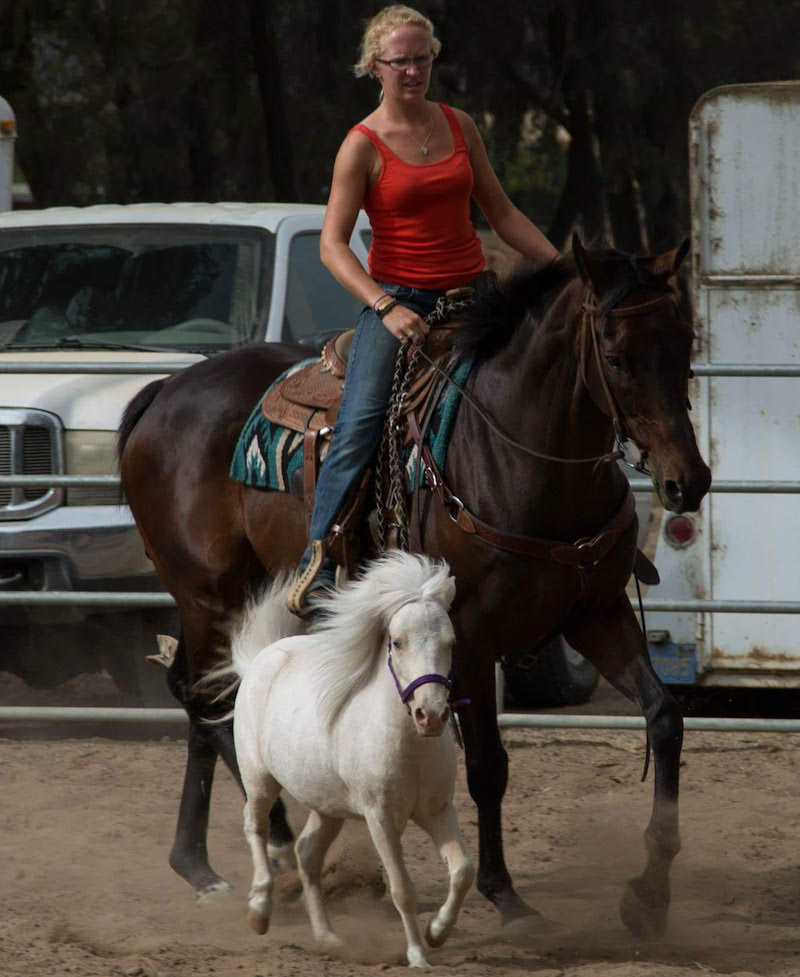 Cooper wasn't thrilled about having a little white ball of fun at his side at first, but now the two are inseparable. ​
Keep in mind that your riding horse will need an introduction to ponying, too. My horse, Cooper, was pretty unsure about the whole idea, so we spent a while making a lot of turns so that he got used to the idea of Cupcake following him.


Going slow was key in making sure
that they were both comfortable
and confident about ponying.​
So how much exercise does Cupcake need? I ride my horse 5-6 days a week for about 30 minutes. Ponying Cupcake during these rides has kept her in great shape! Cupcake and Cooper are actually close enough now that I am able to let her loose on trails and beach rides and she’ll gallop right along next to us. And yes, those little legs keep up!

Cooper and Cupcake at the beach! 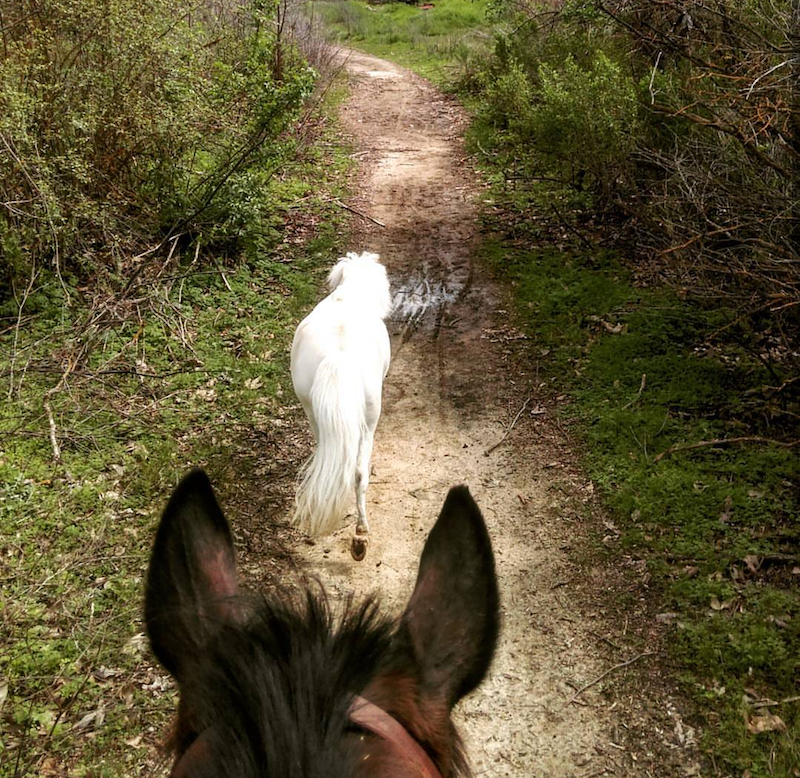 Cupcake has incredible endurance and will spend hours running on the trails in front of me.​
Add a Little Variety

To mix up our routine, some days I will simply lunge her until she has run and bucked and played enough that she is puffing hard. This usually only takes 15 minutes, and it’s a super simple way to make sure she gets a workout in if I don’t have time for a full ride.

Cupcake also likes to jump, so I will mix that into our workout every once in a while. If she starts to put on the pounds, I will start doing two-a-days. For a while, when Cupcake was super overweight, I would pony her while working my horse in the morning, and then take her running with me in the evening – usually about 2 miles! 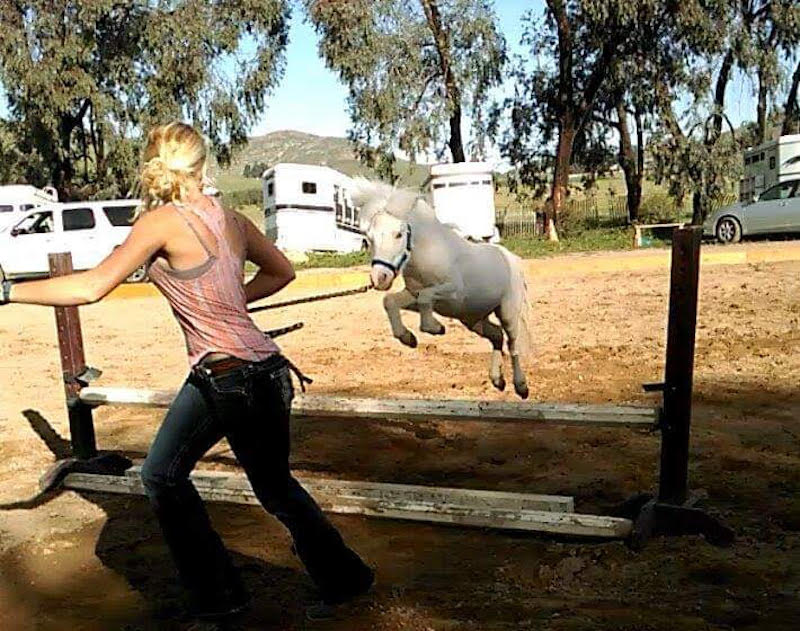 Cupcake is a very athletic little jumper!​
Remember, minis are athletic and they love to play. Keeping your mini fit and at a good weight is crucial for his long-term health, so whether you’re ponying, lunging, or going on trails, explore ways to get creative and have fun with your mini! 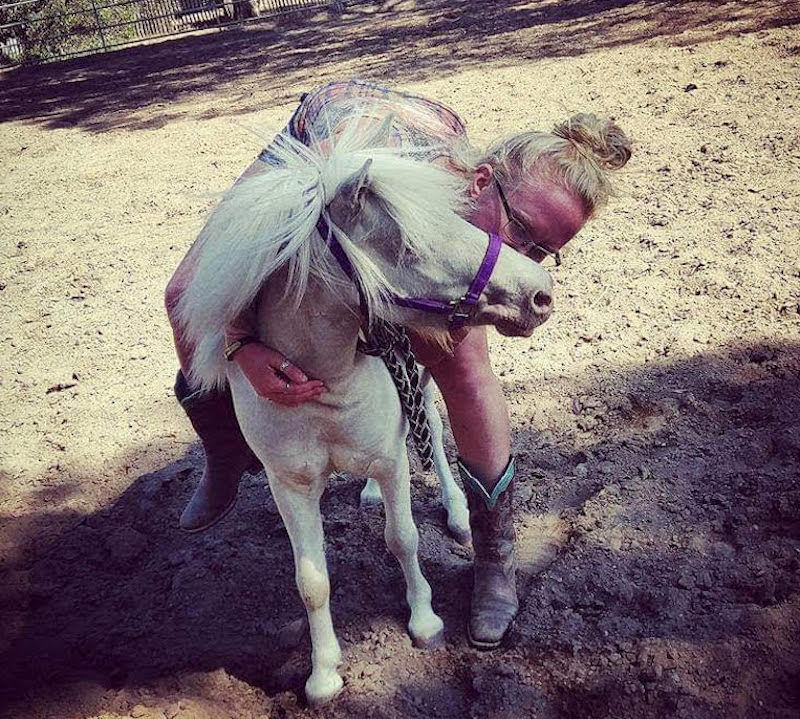